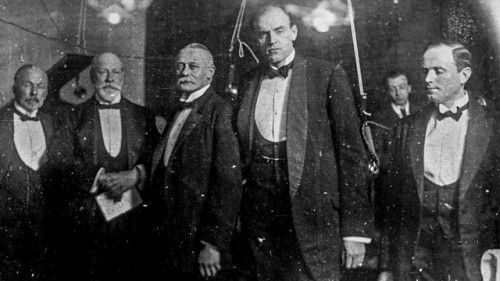 BBC - How the BBC Began (2022)
English | Documentary | Size: 1.85 GB
The often-hilarious stories of the BBC's first 50 years. The corporation's pioneers describe its evolution – which was often by accident rather than design.

Chapter 1: Accident and Opportunity
The eyewitnesses and participants in the BBC's early history recount some of the triumphs and disasters as new frontiers of broadcasting were mapped out – often by accident rather than design. James Burke tells how the Queen Mother helped to shape the BBC's coverage of one Apollo space mission. BBC executive Sir Huw Wheldon describes the tension of producing Sir Winston Churchill's one appearance on television. And June Spencer, famous for her role as Peggy in The Archers, shows the letter she received from a listener who was worried that she didn't know about her unmarried daughter's pregnancy.

Chapter 2: Building the Audience
BBC Television's first female newsreader, Nan Winton, tells the story of how she was sacked because the editor preferred men to read the news. That editor, Michael Peacock, describes his shame at the whole episode. Staff working in the BBC's monitoring service near Reading explain the critical role they played in defusing the Cuban Missile Crisis of 1962, when the world was on the brink of nuclear war. And Tony Blackburn describes the alarm his new colleagues at Radio 1 felt when he said he worked without a script: it meant their morning delivery of coffee and doughnuts was under threat.