E-Books →English Criticism in Japan - Essays by Younger Japanese Scholars on English and Am... 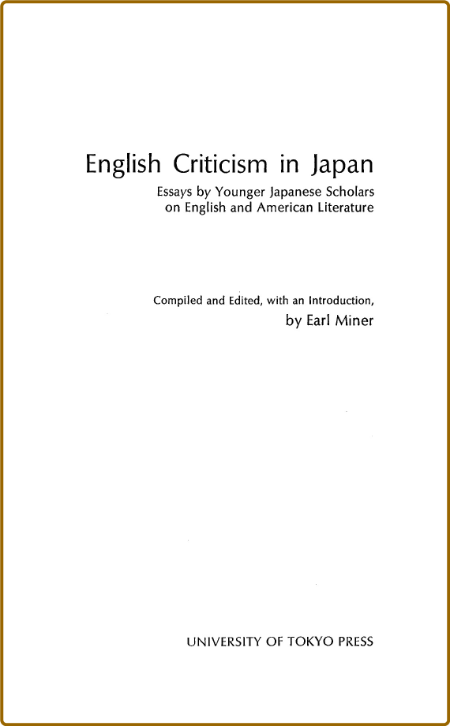 This collection of essays has been compiled in the hope of making scholars in the rest of the world more familiar with Japanese studies in English literature. By revealing to Western scholars the insights and criticisms of their Japanese colleagues they should help to expand the arena of intellectual discussion and improve its quality. The essays are the work of younger scholars from several leading Japanese universities. They range widely over English and American literature, stretching in time from Chaucer to T. S. Eliot, and in subject from the concept of "the royal" in Shakespeare to the involuntary memory as discovered by Coleridge. The writers have some uniquely Japanese perspectives, not of the hackneyed "East meets West" type, but insights stemming, the editor suggests, from these writers' experience of their own very rich literary tradition.

The Princeton Legacy Library uses the latest print-on-demand technology to again make available previously out-of-print books from the distinguished backlist of Princeton University Press. These editions preserve the original texts of these important books while presenting them in durable paperback and hardcover editions. The goal of the Princeton Legacy Library is to vastly increase access to the rich scholarly heritage found in the thousands of books published by Princeton University Press since its founding in 1905.