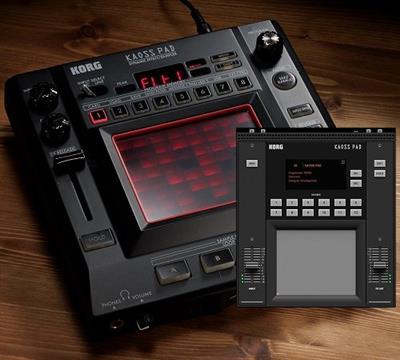 KAOSS PAD Dynamic Effect/Sampler Control by touching the pad. Creating a new dynamic effects processor. Touch, trace, and rub the touch pad to play. The KAOSS PAD series, with its simple and clear concept, has been used not only in the international lDJ world but also in all kinds of music production scenes, evolving from the first-generation KP1 introduced in 1999 to the third-generation KP3+ and further developing into many other music products equipped with its clear interface - building the "KAOSS family" with its clear interface.

Real-time control of effects via touch pad.
Simple operation with real-time control of effect parameters via the touch pad is similar to the hardware KAOSS PAD series. Simply select a preloaded program and touch the TouchPad portion of the UI with a mouse or trackpad to dramatically change the sound. Also, effects can be controlled by sending MIDI CC to "KAOSS PAD for Mac/Win" from a hardware controller.You can control the effect in real time with a hardware controller equipped with an XY pad like the Korg nanoKEY Studio or nanoPAD2.
- In addition, MIDI note on/off control allows you to send note data to reproduce the state in which you touch a certain position on the pad, allowing you to control the effect as if you were playing a keyboard or other instrument. Of course, the automation function on your DAW is also supported, so real-time control can be recorded and reproduced as is, and the automation itself can be elaborately created to express changes in effects that are difficult to achieve with real-time operation. This gives your DAW the flexibility of a plug-in while retaining the clarity of hardware.
The effects programs have been reimagined so you can edit the effects!
"KAOSS PAD for Mac/Win" features an edit page that allows users to edit each and every effect program - a major step up from the hardware versions of the KAOSS PAD series so you can create your own effects programs! Up to five effects can be used simultaneously in an effects program, and settings can be built to control each effect's parameters with four LFOs, four envelope generators, two envelope followers,an XY pad, and a rich set of modulators. The user can build up a configuration to control each modulator and effect. Mapping each modulator to the effect parameters is a simple drag-and-drop operation. You can also set the modulation depth and polarity for each parameter in great detail.
- In the Virtual Patch tab, the mapping between modulation source and effect parameters, polarity, modulation depth, modulation curve, and XY pad resolution (resolution) can be set individually for each mapping. This allows you to create KAOSS effects as deeply as you like. In addition, the input/output settings and panning settings of the five effects allow you to freely position the effects within the sound image in stereo space, creating a truly chaotic world of effects.
25 diverse and manic effect algorithms.
The effects range from spatial effects such as reverb and delay, modulation effects such as chorus and flanger, filter effects such as filter, isolator, and equalizer, digital effects such as grain shifter and impulse response, pitch shifter, ring modulator, vinyl break, looper, and vocal processor, and even analog oscillators that produce their own sound. The effects range from digital effects such as grain shifters and impulse responses, digital effects such as pitch shifters, ring modulators, vinyl breaks, loopers, vocal processors, and even analog oscillators that produce their own sound. Each effect has a wide variety of parameters that can be precisely set to create a wide range of effects.
- The Vocal Processor, in particular, allows you to add vocals while playing back samples, etc., making it possible to complete beat making with vocals using only the KAOSS PAD. This vocal processor is more than just an effects processor; it allows you to enjoy incredible beat making.
A wide variety of effect programs created by talented sound designers are built in.
The KAOSS PAD features 128 built-in effects programs that use up to five different effect algorithms simultaneously, including classic effects suitable for DJ play, gimmicky effects that will surprise, and real-time effects for music production on your DAW, so you can enjoy the real-time effects control that is typical of the Kaoss Pad, whether in the DJ booth, on stage, or in the studio. You can enjoy the real-time effect control that is typical of the Kaoss Pad in the DJ booth, on stage, and in the studio.
Whats new in this version
Official site does not provide any info about changes in this version.
System Requirements
Windows 7 or newer