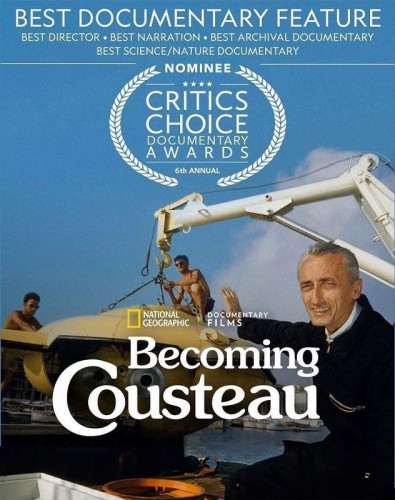 National Geographic - Becoming Cousteau (2021)
English | Size: 2.26 GB
Category: Documeentar
BECOMING COUSTEAU examines the epic life of Jacques Yves Cousteau, the ocean explorer who spanned the globe with a misfit crew of divers and filmmakers, under the lifelong creed, "Il faut aller voir" -- "We must go and see for ourselves". Adventurer, filmmaker, inventor, author, unlikely celebrity and conservationist: For over four decades, Jacques-Yves Cousteau and his explorations under the ocean became synonymous with a love of science and the natural world. As he learned to protect the environment, he brought the whole world with him, sounding alarms more than 50 years ago about the warming seas and our planet's vulnerability.
Say the name Jacques Cousteau and people all over the world can conjure an image of the French sea adventurer in a red cap aboard his ship Calypso. His groundbreaking films and TV series opened the world's eyes to the undersea realm. He became a dedicated conservationist, starting The Cousteau Society to preserve marine life. While many of us can cite those basic facts, we may not grasp much more.
The Frenchman who first sounded the alarm to save the oceans was born with a dream to fly, but a car accident grounded his aviation career, and he found rehabilitation and inspiration through free-diving in the South of France. His desire to go deeper and further led him to inventions that would forever change the way we see and know the undersea world, co-inventing the "aqualung" and revolutionizing underwater cinematography. At the start, a burgeoning oil industry backed his explorations paving the way for ocean exploitation. Then, the television industry made him an international star. His trailblazing underwater cinematography and high sea adventures aboard the Calypso introduced generations around the world to the wonders of the seas, but when Cousteau started to see with his own eyes the destruction and degradation of the oceans, he sounded the alarm. But was it too late?
In BECOMING COUSTEAU, from National Geographic Documentary Films, two-time Academy Award-nominated filmmaker LIZ GARBUS takes an inside look at Cousteau and his life, his iconic films and inventions, and the experiences that made him the 20th century's most unique and renowned environmental voice - and the man who inspired generations to protect the Earth. Documentary features never-before-seen 4K footage of Captain Cousteau with exclusive access to the Cousteau Society Archives. Learn about Captain Cousteau's life, his adventures and inventions, and his advocacy that inspired generations to become Custodians of Our Seas.

Directed by Liz Garbus ; Produced by Story Syndicate in Association with The Cousteau Society and Ace Content and Diamond Docs for National Geographic Documentary Films