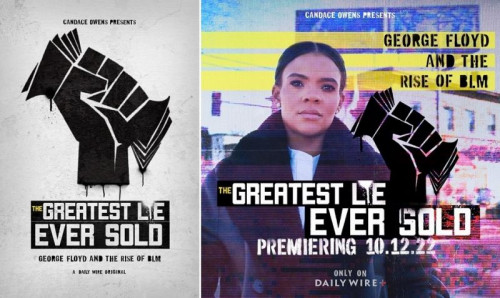 Daily Wire Entertainment - The Greatest Lie Ever Sold: George Floyd and the Rise of BLM (2022)
English | Documentary | Size: 1.95 GB
As evidenced by the wild success of Netflix's "Monster: The Jeffrey Dahmer Story", American culture is obsessed with criminals, and all too frequently such individuals enjoy cult-like status. Charles Manson infamously received love letters while in prison, and copycat crimes are a common occurrence. But in our age, the worship of criminals has changed. Such cults are no longer nihilistic.

Instead, the criminal is somehow turned into a saint who stands for some vague social justice ideal. Those individuals have no merits of their own, other than having encountered a tragic end. They are lionized solely on the basis of having been the victim of some injustice, no matter how unjust they may have been towards others.

George Floyd is perhaps the most emblematic case in our times. Candace Owens' "The Greatest Lie Ever Sold" seeks to remove the mystic aura that surrounds this dubious character, and how BLM hoodwinked and bamboozled countless Americans.

In the aftermath of George Floyd's death, the media concocted a narrative that justified a summer of worldwide riots and helped contribute to the rise of Black Lives Matter, who used the chaos to raise 90 million dollars. In this new documentary, Candace Owens follows the money and discovers exactly how the money was spent and where it did–and didn't go.

A BLM front person bought a mansion for three million, and then sold it to BLM for six million within days, creating a personal profit of three million. BLM has poured over two million dollars into trans groups, including groups for trans sex workers. S32 million of Marxist, anti-Western, anti-American BLM's assets went into the stock market.

On the 2-year anniversary of George Floyd's death, Candace Owens revisits Minneapolis and the violent, racially-divided aftermath that fueled BLM's global rise-and filled its coffers. Beginning in spring, 2020, destructive and deadly riots broke out across the United States. These riots self-advertised as being all about a "racial reckoning." At least 25 Americans were killed during protests and political unrest in 2020, and in addition to those killed in the riots, 2,457 more black Americans were murdered in 2020 than in 2019, marking the largest single-year increase in killings. Anti-policing policies and attitudes and increasing lawlessness are to blame for these deaths and thousands more.

The BLM expose takes a deep-dive into the multi-million dollar "grift" of the Black Lives Matter Global Network Foundation and its former Executive Director Patrisse Cullors. In the film, Owens offers viewers "the true story" behind the life and death of George Floyd and the rise of the movement with never-before-seen interviews from insiders and experts.

A Film by Candace Owens ; A Daily Wire Entertainment Production